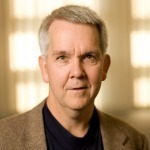 Paul Bohn, Arthur J. Schmitt Professor of Chemical & Biomolecular Engineering and Professor of Chemistry & Biochemistry, has been selected as the winner of the 2017 ACS Division of Analytical Chemistry Award in Electrochemistry. This prestigious award recognizes a scientist who advances the field of electrochemical analysis through conceptualization or development of unique instrumentation, elucidation of fundamental electrochemical events or processes, and/or authorship of important research papers that impact the field.

Bohn was recognized for his research that has pioneered the extension of traditional electrochemical science into new areas such as nanofluidic electrochemistry in low-dimensional nanostructures, the electrochemistry of atomic-scale conductors, and electrochemically tunable surfaces. He was the first to observe electrically-actuated gating action in nanocapillary array membranes (NCAMS), which are used to control molecular transport. Bohn also established the use of metallic structures in nanofluidic architectures, allowing for simultaneous coupling of electrokinetic injection, plasmonic detection, electrochemistry, and molecular self-assembly. This integration of working electrodes into nanochannels enables highly efficient linking of mass transport to electrochemistry and results in devices with extremely high reaction conversion and selectivity. Bohn’s work on nanofluidic devices also led to a new sensing paradigm where a bipolar electrode that pairs self-induced redox cycling in nanopore arrays with a remote fluorigenic reporter reaction provides an optical readout of optically dark electron transfer reactions.

Bohn’s group developed a unique microfluidic-electrochemical approach to the growth of atomic-scale junctions. These junctions exhibit quantum conductance states resulting in extremely high sensitivity to molecular adsorption – in the case of Lewis bases down to < 5 molecules. Building on this work, Bohn developed a frequency-domain fluctuation spectroscopy measurement of single chemical events at the junctions that provides observation of the behavior of extremely small collections of matter (~1000 molecules). Bohn has also utilized changes in molecular adsorption at metal-liquid interfaces due to resistivity to map electrochemical reactions onto surfaces to achieve electrochemical gradients leading to a new class of controlled surface architectures. Research groups around the world have used this approach to create unique architectures to control both physical and chemical processes.

Prof. Bohn joined the University of Notre Dame in 2006 after twenty-three years at the University of Illinois, Urbana-Champaign. He is a Fellow of the American Association for the Advancement of Science, the Royal Society of Chemistry, and the Society for Applied Spectroscopy. Bohn is also the recipient of the Theophilus Redwood Award, the Bomem-Michaelson Award, the ACS Award in Spectrochemical Analysis, the Coblentz Award, and the Spectroscopy Society of Pittsburgh Award.