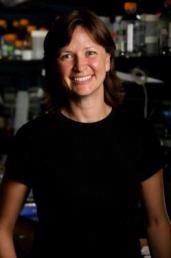 Patricia Clark, the Rev. John Cardinal O'Hara, C.S.C. Associate Professor of Chemistry and Biochemistry at the University of Notre Dame, and Bonnie Berger, professor of applied mathematics at the Massachusetts Institute of Technology, have published a paper on the development of a computer algorithm that can accurately predict which parts of protein sequences help prevent the proteins from aggregating.

Their article, the second published by the interdisciplinary research team, was submitted to the journal Proceeding of the National Academy of Science USA. The experimental work was completed at Notre Dame in Clark's laboratory with Berger testing the computational predictions in her lab.

Protein aggregation occurs when the long linear sequence of a protein misfolds and begins to interact with copies of itself, thus preventing it from performing its essential functions in the cell.

Clark and Berger found that aggregation-resistant proteins tend to possess "capping" structures at either end of their correctly folded structure. However, if a "cap" is removed, the remaining protein aggregates quickly.

Proteins known to be highly prone to aggregation do not contain said capping structures, a finding that could help predict which proteins along with which genetic mutations will likely lead to aggregation.

Misfolding and aggregation can lead to numerous diseases ranging from juvenile cataracts to cystic fibrosis and cancer. Aggregated proteins can also form toxic structures known as amyloid fibers, which are linked to Alzheimer's, Huntington's, Lou Gehrig's and other neurodegenerative diseases.

The two hope that by studying the mechanisms that can lead to aggregation as well as the structural features that some proteins possess that help avoid aggregation, strategies can be discovered to help treat aggregation diseases.