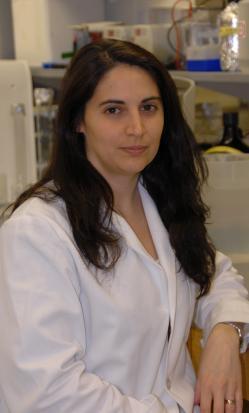 Leticia Llarrull, a postdoctoral research associate in the Department of Chemistry and Biochemistry, was named a 2008 Pew Latin American Fellow in Biomedical Sciences. Llarrull’s research in the Mobashery laboratory has applications to Methicillin-resistant Staphylococcus aureus (MRSA) which has emerged globally as an important pathogen that is resistant to all classes of commercially available beta-lactam antibiotics.

As a Pew Fellow, Llarrull will receive $60,000 of compensation from the Pew Charitable Trusts over two years for her research and training as well as $35,000 for equipment to set up her own research laboratory when she returns to Argentina. She is one of only ten Latin American Fellows nationally.

Llarrull says, “I have always been fascinated with the complexity of the cell function and in particular, with the mechanisms of resistance evolved by pathogenic bacteria to avoid either the immune system or to avoid the lethal effect of β-lactam antibiotics.” Before coming to Notre Dame Llarrull was the recipient of three Ph.D. fellowships from the National Agency of Scientific and Technological Promotion in Argentina and the Argentine National Scientific Research Council (CONICET), including a postdoctoral fellowship in 2007.

The Pew Latin American Fellows Program in the Biomedical Sciences provides support for young scientists from Latin America to receive post-doctoral training in the United States. The program gives these individuals an opportunity to further their scientific knowledge; promotes exchange and collaboration between investigators in the U.S. and Latin America; and advances basic research in Latin America. The award will be formally given to Llarrull in June after the Pew Charitable Trusts board meeting.