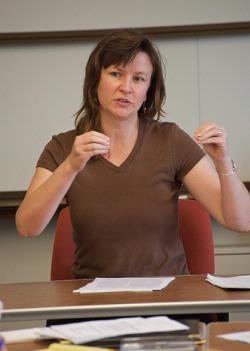 The Biophysical Society has selected Patricia Clark, the Rev. John Cardinal O’Hara, C.S.C. Associate Professor of Chemistry and Biochemistry and concurrent professor of chemical and biomolecular engineering, as the recipient of the 2013 Michael and Kate Bárány Award for Young Investigators. This award recognizes an outstanding contribution to biophysics by someone who has not reached the rank of full professor. Clark was selected for her research on the biophysics of protein folding in the cell, which has provided new directions of research for both experimentalists and theoreticians.

Clark studies vectorial protein folding, which occurs when a protein chain is placed in an environment where one end of the chain can begin to fold before the other. She has shown that vectorial folding can alter mechanisms for protein folding in the cell, altering the likelihood that a protein will fold correctly, versus misfold and aggregate. Protein misfolding is a leading cause of numerous human diseases, including cancer, cystic fibrosis and numerous neurodegenerative diseases. Previous test tube studies of protein folding used purified, full-length proteins, and were not able to mimic the vectorial appearance of the protein chain during its synthesis or transport across a cell membrane. The broad impact of Clark’s work is that any attempt to explain protein folding, either computationally or experimentally, must now consider the contribution of the vectorial appearance of a protein chain to its folding mechanism.

Clark is the first Notre Dame faculty member to win an award from the Biophysical Society and she will be recognized at the Society's Annual Meeting in Philadelphia in February 2013. Past recipients of the Michael and Kate Bárány Award include Roderick McKinnon of Rockefeller University and a 2003 recipient of the Nobel Prize in Chemistry, Winfried Denk of the Max Planck Institute in Heidelberg and a 2012 Kavli Prize awardee, Taekjip Ha of University of Illinois Champaign-Urbana and Vijay Pande of Stanford University.

The Biophysical Society was founded in 1957 to encourage development and dissemination of knowledge in biophysics. The Society's 9,000 members work in academia, industry, and in government agencies throughout the world.