Malaria is a blood borne illness caused by Plasmodium parasites. With over 198 million malaria cases reported worldwide in 2013, ensuring the existence of viable treatment options is critical to public health, especially in tropical and sub-tropical regions, where the disease is widespread. Artemisinin combination therapy (ACT) is the primary treatment for malaria, but resistance to these medications is appearing, causing grave concerns for the future of malaria treatment. Combatting ACT resistance is hampered by the fact that the mechanism of action of artemisinin is not fully understood.
Researchers at Notre Dame in the Departments of Chemistry and Biochemistry, Biology, and Computer Science and Engineering, along with colleagues at the University of Buea (Cameroon), Mahidol University (Thailand), the National Center for Parasitology, Entomology and Malaria Control (Cambodia), University Montpellier (France), the New York Blood Center, and the University of Oxford (England), have now identified a novel target of artemisinin that is crucial in understanding the mechanism of action and resistance in malarial parasites. Their findings are reported in the April 30, 2015 issue of the journal Nature (2015, vol. 520, pp.683-687). 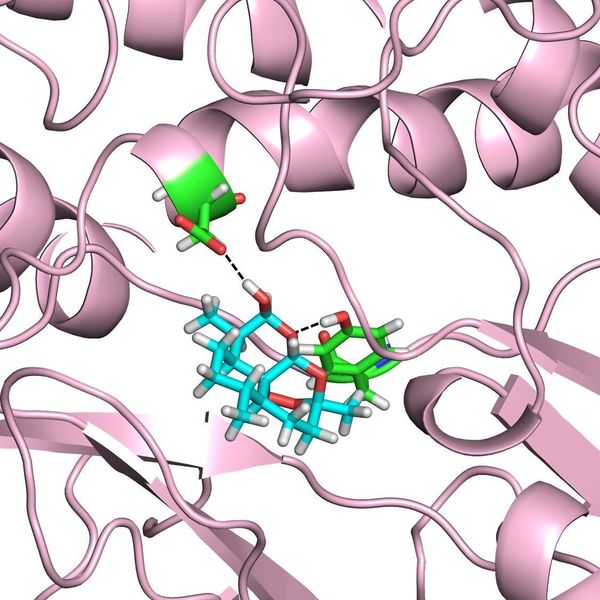 The researchers focused their study on Plasmodium falciparum phosphatidylinositol-3-kinase (PfPl3K) and its lipid product phosphatidylinositol-3-phosphate (Pl3P). Using homology modelling of PfPl3K and molecular dynamics (MD) simulations, the team was able to rationalize the experimentally observed binding of dihydroartemisinin (DHA), the active form of artemisinins, with several structural analogs of PfPl3K.  The results of these simulations indicate that polar contacts of DHA with portions of PfPI3K at the binding site as well as excellent shape complementarity in the hydrophobic region may control the mechanism of DHA activity.
The data presented suggest that DHA specifically targets PfPI3K. The team found that PfPl3K activity, measured by Pl3P production, quantitatively estimates resistance across multiple strains of the Plasmodium parasite. In fact, there is a linear correlation between levels of Pl3P and resistance for both clinical and genetically engineered laboratory strains of the parasite. A 2.5-fold increase in Pl3P induced more than an order of magnitude increase in artemisinin resistance, indicating that small changes in Pl3P levels may lead to dramatic changes in resistance.
While DHA has other targets in the later stages of the parasite, PfPl3K is the first target to be identified in the early ring stages. Since clinical resistance to artemisinins develops in the early ring stage, the team’s results show that targeting PfPl3K will be vital to developing new therapies to circumvent artemisinin resistance and to effectively control malaria.