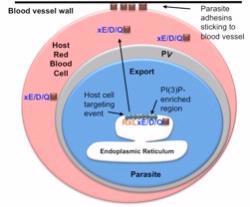 Malaria is a blood disease that kills nearly 1 million people each year. It is caused by a parasite that infects red cells in the blood. Once inside the cell, the parasite exports proteins beyond its own plasma membrane border into the blood cell (see image). These proteins function as adhesins that help the infected red blood cells stick to the walls of blood vessels in the brain and cause cerebral malaria, a deadly form of the disease that kills over half a million children each year.

A team of scientists led by Dr. Kasturi Haldar and Dr. Souvik Bhattacharjee at the Center for Rare and Neglected Diseases, Department of Biological Sciences, University of Notre Dame, has made a fundamental discovery in understanding how malaria parasites cause deadly disease. Their results will be published in the January 20th issue of the journal Cell, the number one journal in the life sciences and a Cell Press Publication (DOI 10.1016/j.cell.2011.10.051). They show how parasites target proteins to the surface of the red blood cell that enables sticking to and blocking blood vessels. Strategies that prevent this host-targeting process will block disease. The study was supported by the National Institutes of Health.

In all cells, proteins are made in a specialized cell compartment called the endoplasmic reticulum (ER) from where they are delivered to other parts of the cell. Haldar and Bhattacharjee collaborated with Dr. Robert Stahelin at the Indiana University School of Medicine- South Bend/adjunct faculty, Department of Chemistry and Biochemistry, University of Notre Dame, and with Drs. David and Kaye Speicher at the Wistar Institute, University of Pennsylvania to discover that for host-targeted malaria proteins the very first step is binding to the lipid phosphatidylinositol 3-phosphate, PI(3)P, in the ER. This was surprising for two reasons. Previous studies suggested an enzyme called Plasmepsin V that released the proteins into the ER, was also the export mechanism. However, Haldar, Bhattacharjee and colleagues discovered that binding to PI(3)P lipid which occurs first, is the gate keeper to control export and that export can occur without Plasmepsin V action. Further in higher eukaryotic cells(such as in humans), the lipid PI(3)P is not usually found within the ER membrane but rather is exposed to the cellular cytoplasm.

Drs. Haldar and Bhattacharjee are experts in malaria parasite biology and pathogenesis. Dr. Stahelin is an expert in PI(3)P lipid biology, and Drs. David and Kaye Speicher are experts in proteomics and a method called mass spectrometry. This interdisciplinary collaboration reveals a fundamental, novel cellular function, disruption of which can provide new therapies that are urgently needed for malaria.