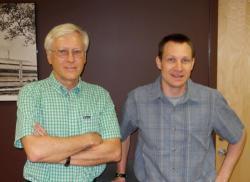 Tuberculosis (TB) is a serious global health risk resulting in an estimated 1,800,000 deaths in 2008. Mycobacterium tuberculosis, the causative agent of TB, is an airborne pathogen that can be spread from one person to another when in close contact. Because it often lies dormant for many years, it is a silent killer among poor, HIV-infected, immunologically compromised, and elderly persons. Cases of multiple-drug resistant TB (MDR-TB) and extensively drug resistant TB (XDR-TB) are on the rise. In 2008, there were 12,898 cases of TB reported in the United States. The Miller laboratory is fighting to erode the global TB epidemic by working to identify cost effective anti-TB agents, and was recently aided in this endeavor by receiving a $1.9 million grant by the NIH.

The focus of the Miller lab research is twofold, aiming first to understand TB’s essential iron sequestration machinery to discover new targets and then to target and exploit this pathway for developing novel anti-TB agents. The synthesis of the iron chelating siderophores from mycobacteria allows for the exploitation of a “Trojan Horse” drug treatment with new and existing drugs. Additionally, the Miller lab will utilize this funding to advance their current lead small molecule anti-TB agents (nanomolar inhibitors of MDR and XDR-TB) through in vivo pre-clinical development, patenting, and potential industry partnering. The Miller team is aided by partnerships with Professor Scott Franzblau (University of Illinois, Chicago), DowAgroScience, Lilly TB Initiative and has collaborations with the NIH, Colorado State University and research centers in Germany.

In the photo: Marvin Miller and Garrett Moraski.