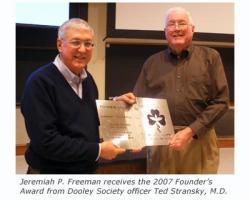 Jeremiah P. Freeman, emeritus professor of chemistry and biochemistry, received
the 2007 Founder’s Award from the Dr. Tom Dooley Society, Medical Alumni of
Notre Dame. The award, which is the highest award given by the society, is in
recognition for the numerous years of service that Freeman gave to
preprofessional students. As an organic chemistry professor, Freeman taught
nearly all of the students applying to medical schools and wrote countless
letters of recommendation.


Ophthalmologist Ted Stransky, M.D. presented the award to Freeman at the
society’s lecture on October 20. Freeman is well-known for his amazing ability
to instantly recall his student’s grades. After Stransky began his practice,
the two of them met randomly. Freeman briefly scanned his memory and said,
“Stransky. I gave you an ‘A’, didn’t I?”  Freeman and Stransky jokingly advise
asking a potential physician what grade he/she received in organic chemistry
when choosing to use their services.


Freeman’s fascination with chemistry began in high school in the 1940s. His
father owned a drug store, so he could easily obtain chemicals for his initial
experiments. His formal introduction into research came during the fall of his
senior year at Notre Dame in 1949 when he joined the laboratory of Professor
Ernest Eliel. After being admitted for graduate work at the University of
Illinois after his graduation from Notre Dame in 1953, he joined the research
group of R. C. Fuson and eventually took a job with the Redstone Arsenal
Research Division of the Rohm and Haas Company.


He returned to Notre Dame in 1964 at the invitation of Professor Eliel, who
later became the head of the chemistry department. In 1979, he was elected to
the position of secretary of Organic Syntheses, Inc. He retired from Notre Dame
in 1995.