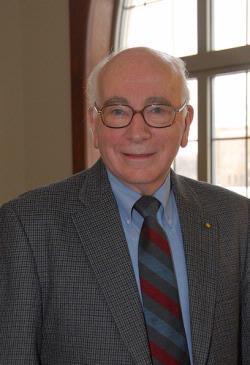 Anthony M. Trozzolo, the Charles L. Huisking Professor Emeritus of Chemistry, has received a 2012 University of Chicago Professional Achievement Award from the Alumni Board of Governors. Trozzolo earned a master’s degree in chemistry in 1957 and a Ph.D. in chemistry in 1960, both from the University of Chicago. He worked at Bell Laboratories before he came to Notre Dame in 1975.

Trozzolo, a pioneer in photochemistry, has delivered more than 300 invited lectures, published more than 90 articles and received 31 U. S. and foreign patents. He was elected a Fellow of the American Association for the Advancement of Science and the American Institute of Chemists in 1963, and he organized and chaired the first Gordon Research Conference on Organic Photochemistry in 1964.

Trozzolo received the Gregory and Freda Halpern Award in Photochemistry of the New York Academy of Sciences in 1980, and was elected a Fellow of the Inter-American Photochemical Society in 2000. He has been Associate Editor of the Journal of the American Chemical Society, Editor of Chemical Reviews, a member of the Editorial Advisory Board of Accounts of Chemical Research and a trustee of the Gordon Research Conferences.