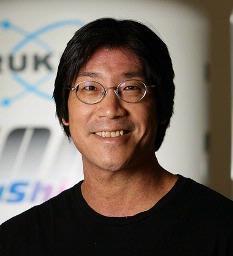 A collaborative study between the laboratories of Jeff Peng at the University of Notre Dame and Felicia Etzkorn at Virginia Tech has discovered an important element of how an enzyme involved in cell division does its job. Their report, "Stereospecific gating of functional motions in Pin1," was recently published in the online edition of Proceedings of the National Academy of Sciences.

Pin1 controls the proteins that start cell division by changing the shape of their peptide bonds. Consisting of two loosely-connected domains or structural modules (a catalytic domain and a Trp-Trp (WW) domain), it binds to a target peptide bond, which increases communication between the two domains.

That molecular basis for the cross-protein communication was unclear, until now.

Using nuclear magnetic resonance (NMR) spectroscopy, the researchers discovered that Pin1 undergoes different changes in dynamics when it binds different shapes. Meaning that when Pin1 binds to a cis-shape, its internal dynamics decrease more dramatically than when it binds a trans-shape.

The sites show dynamic changes, indicating that an internal conduit which links the two domains provides the cross-protein communication.

"The results suggest that the binding of different shapes turns on different dynamics relevant for intra-molecular communication," Peng said. "We knew that cis- versus trans- binding gave rise to different behavior but we didn't know how. Now we know that the moving parts of the protein are critical."

Peng's lab conducted the NMR experiments on Notre Dame's high-field NMR spectrometers by using special ligands, designed in Etzkorn's lab, that were locked in the cis- versus trans- shapes.

That equipment provided the high sensitivity and resolution necessary to collect meaningful dynamics data. Peng was able to capture the protein in action on video rather than the stop-action images, which were previously used.

The Pin1 findings also help understand the mystery of allostery, the phenomenon where a ligand binding at one protein site effectively communicates to another distinct site. Those results now show that protein dynamics may play a role in one of the basic challenges in fundamental protein biophysics.

Other authors of the report include Andrew Namanja, a postdoctoral associate at the Beckman Research Institute of the City of Hope; and Kimberly Wilson, a graduate student in Peng’s lab, in addition to members of Etzkorn’s lab.