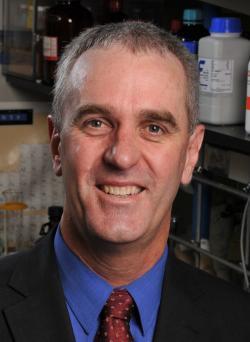 Bradley Smith, the Emil T. Hofman Professor of Chemistry and Biochemistry, and a team of 16 science and engineering researchers have been awarded a major grant by the University's Strategic Academic Planning Committee (SAPC) to create the Notre Dame Integrated Imaging Facility.

The facility is expected to benefit researchers in 50 separate research groups from the colleges of science, engineering, and arts and letters as well as the Radiation Laboratory. The idea grew out of discussions that Professor Smith had last summer with a dozen colleagues in chemistry, biology and engineering. The scientists and engineers, who work on everything from bacterial infections to next-generation electronics, realized that they have a common need for the best possible images of the objects of their study. Since state-of-the-art imaging devices are extraordinarily expensive, the group understood that an equipment collective would allow them all to raise the bar on their work. "This is a particularly smart strategy at a place such as Notre Dame, because it sets the stage for a variety of synergies and allows us to be more ambitious in our research targets," says Smith, NDIIF's founding director. "With improved infrastructure we can think more in terms of high-risk, high-reward projects, and this is really crucial as the University takes its next step up."
The NDIIF will house seven instruments at three campus locations, including engineering's new Stinson-Remick Hall, now under construction. With price tags ranging from $300,000 to $1.8 million, the equipment includes everything from scanning electron microscopes that can see atoms and molecules to fluorescence microscopes that allow researchers to view biological processes in living animals. As important as the hardware may be, Smith believes the provision for monthly NDIIF user meetings may be just as valuable because of their potential to transform the University's research culture.