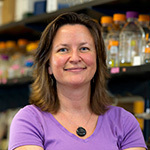 Patricia L. Clark, the Rev. John Cardinal O'Hara, C.S.C. Professor of Chemistry and Biochemistry, has received a $3.8M award from the National Institutes of Health (NIH) to lead a pioneering model of collaboration that draws together seven institutions, eight co-PIs and six postdoctoral associates to study macromolecular interactions in living cells. Norm Dovichi, the Grace-Rupley Professor of Chemistry, is also a PI, focusing on separations and single molecule detection. Matthew Champion, a Research Assistant Professor in the Mass Spectrometry and Proteomics Facility, will serve as deputy director of the team.

The Protein Translation Research Network (PTRN) represents a new approach to collaborative research expressly designed to reduce barriers to collaboration between NIH-funded investigators at geographically distant sites. "The purpose of the network is to glue together labs who already have existing research programs in this area," Clark said. "By collaborating closely and dynamically, research questions that might be impossible for a lab to answer individually will now be accessible. The eight laboratories are from widely different fields, ranging from bacterial genetics, computer simulations, biophysics and everything in between, which we expect will facilitate new interdisciplinary collaborations."

The network will study how proteins fold during their synthesis in living cells, specifically how the rate of synthesis affects the success of protein folding. Inaccurate protein folding is involved in a wide range of human diseases, including cancer, Alzheimer’s, cystic fibrosis, diabetes, cataracts, Parkinson’s disease and Niemann-Pick Type C.