Building a close-knit scientific research community at Notre Dame is one of the reasons the College of Science Joint Annual Meeting (COS-JAM) is so popular, according to Xuemin (Sheryl) Lu, director of undergraduate research. 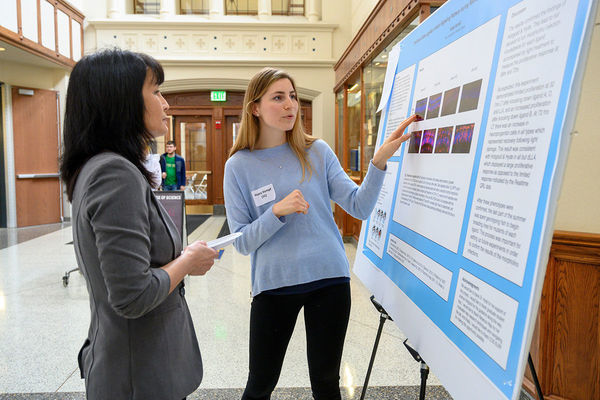 Faculty members, post doctoral researchers, graduate students and undergraduates came together for the 13th annual event at Jordan Hall on May 3 to recognize the research achievements of undergraduate science students. “The research is really amazing,” said Lu, adding that some of the projects have been in progress for as long as three years.

This year, 100 students with 94 projects took part in COS-JAM, which features poster and oral presentations throughout the afternoon. The experience is intended as more of a low-key way for students to learn how to communicate the results of their research to others who may or may not be familiar with the particular area of study.

One of those students, Haley Kempf, a rising senior in neuroscience, studied zebrafish in order to discover a link between the fish and human cell regeneration in diseases of the eye, which affect millions worldwide. By using a “Morpholino Knockdown” she injected dye into the corneas of the zebrafish and bred mutant fish to study the factors needed for regeneration to occur.

“If we found a mutant in one of the lines, we had to wait two to three months and then check the babies,” Kempf added.  Her group worked under David R. Hyde, Kenna Director of the Zebrafish Research Center and a professor in the Department of Biological Sciences.

“There is something exciting about sharing the culmination of hours spent genotyping, staining, and confocal imaging in the basement of Freidman Life Sciences with an audience of interested peers and professors,” said Kempf. “This experience has bolstered my confidence in presenting research findings as well as opened up a forum for exchanging information about research projects with students.”

A 2018 Sorin Scholar who studied in Copenhagen, Denmark, Kempf is intrigued by the possibility of spinal cord regeneration and hopes to travel to India to study rehabilitation programs in spinal cord injuries.

“I believe the experience was very helpful in not only presenting my research to others interested in the field, but looking at research outside of my field as well,” said Norman Jin, a rising senior majoring in preprofessional studies. He studied a particular protein – AMIGO2 – that is overexpressed in ovarian cancer. 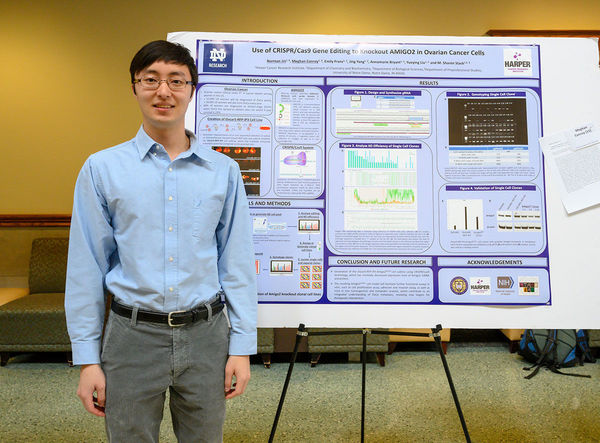 “Presenting at COS-JAM and explaining my findings to others helped deepen understanding of my own research, as it gave me an opportunity to articulate exactly what we were doing in the lab,” said Jin, who was advised by Jing Yang, a research scientist in the Department of Chemistry and Biochemistry.

After spending months examining 26,640 photos of an eagle’s nest (formerly a nest of a red-tailed hawk) at St. Patrick’s County Park, rising senior and biology student Firas A. Houssein relished the opportunity to share the results of his project with others.

“It was so rewarding to see other people interested in your project,” said Houssein, who began the documentation of bald eagle prey after encouragement from his advisor, Gary A. Lamberti, professor in the Department of Biological Sciences and director of the Stream and Wetland Ecology Lab.

Houssein took note of the types of prey brought to the nest to feed the three eaglets. While bald eaglets were found to mainly feed on various kinds of fish, the male and female bald eagle brought 134 prey items to the nest during the 74 days the photographs were studied. Some of the prey included Northern Pike, Painted Turtle, Fox Squirrel and American Coot.

“I would call bald eagles opportunistic consumers,” said Hussein, noting that when they were not able to kill prey on a particular day, they would scavenge for “whatever they could get,” discovering there were days when no sustenance was indicated by the ND-LEEF eagle cam, but added there was never a time when that happened two days in a row.

While the photos of prey on the poster seem rather gruesome to the outsider, Hussein laughed that those images were some of the tamest recorded.

Physics major Patrick McGuire, ’19, took his interest in lead screening to the neighborhoods of South Bend after making testing kits for school children and then automating the testing process with a conveyor belt machine. Using a combination of physics, chemistry and engineering, students came up with the novel testing method, which has helped determine the levels of lead exposure, mainly from paint chips, in residential areas.

Two years ago, he began sampling soil, water and paint chips to determine where the greatest need existed.

“The purpose of the research was to give reports back to the students,” said McGuire, who wants to pursue applied sciences in order to continue interacting with those who need assistance, such the young children most affected by lead poisoning. He worked under the tutelage of Graham Peaslee, professor of physics.

Originally published by Kathy Jonas at science.nd.edu on May 14, 2019.