We normally think of liquids and solids as being distinct forms of matter that behave differently: liquids respond to changes by flowing, whereas solids are rigid. However, there is a whole class of fluids that show both solid- and liquid-like behaviors. These materials, which are known as non-Newtonian or viscoelastic fluids, typically act like solids when subjected to fast, high frequency motions and like liquids for low frequency motions. A well-known example is a mixture of cornstarch and water, which is a staple of elementary school science fairs. This material feels like a liquid when you push on it slowly and like a solid when you hit it quickly. 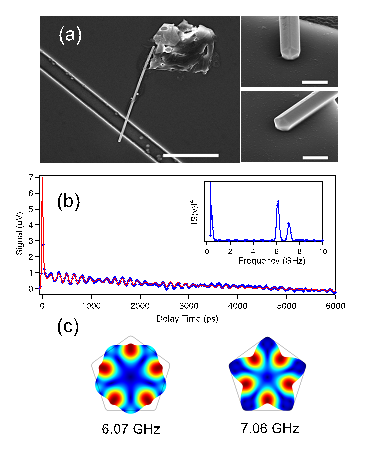 Whether viscoelastic effects are important or not depends on a parameter called the Deborah number, which is the relaxation time of the liquid multiplied by the frequency of the motion. High Deborah numbers mean solid-like behavior. Most simple liquids have low Deborah numbers (fast relaxation times) and do not display viscoelastic effects under normal conditions. However, a recent paper published in Nano Letters by researchers in the Hartland group along with their collaborators at the University of Melbourne shows that at the nanoscale, even simple liquids can act like viscoelastic liquids. (Yu, et al., Nano Letters, 2015, 15, 3964-3970.)

In their experiments, gold nanowires were suspended over trenches cut into a glass surface. An ultrafast laser was then used to excite the nanowire and to measure the response. An example is shown in the figure. The middle panel shows time-resolved measurements for a single suspended nanowire, where the breathing modes can be seen as oscillations in the trace. Adding viscous (glycerol) to moderately viscous (ethylene glycol) liquids to the sample decreases the lifetime of the breathing modes but not to the extent expected for a normal Newtonian liquid. This demonstrates that the liquids store elastic energy. Viscoelastic effects appear in these experiments because of the high frequencies inherent to the breathing modes of nanomaterials.

This is the first time that compressional viscoelastic effects have been seen in simple liquids. Further experiments are planned to examine other liquids. These measurements may also provide a way of probing viscoelasticity in complex materials like cells with nanometer spatial resoluation.