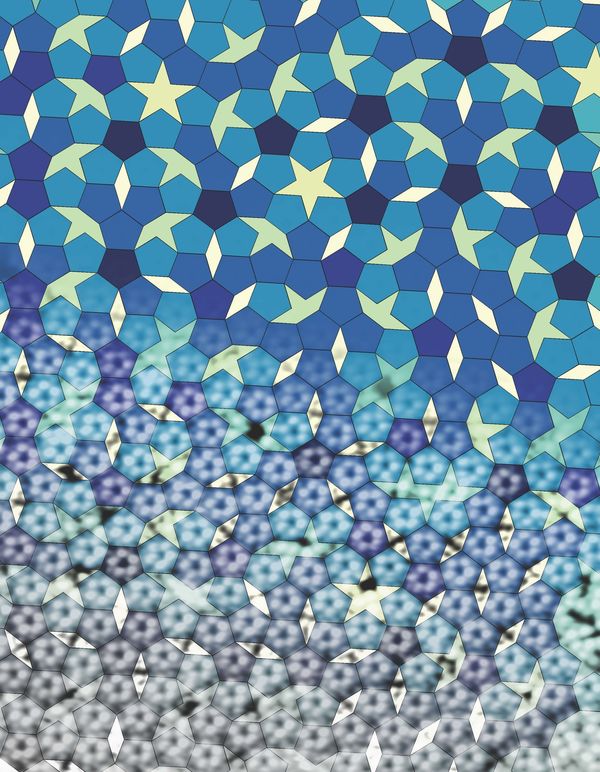 A group of Notre Dame researchers, led by Prof. S. Alex Kandel, has discovered a new quasicrystalline material that results from the self-assembly of ferrocene carboxylic acid.  When these small molecules form monolayers—single-molecule-thick coatings on surfaces—they exhibit highly unusual five-fold symmetry. The work is presented in a paper entitled “Self-Assembly of Hydrogen-Bonded Two-Dimensional Quasicrystals” in the March 6, 2014 issue of Nature.

The research team includes Profs. Kenneth Henderson, Craig Lent, and Steve Corcelli, and their graduate students Natalie Wasio, Rebecca Quardokus, Ryan Forrest, and John Christie.  Initially, they set out to make measurements of electron distribution and to characterize intramolecular electron transfer in single molecules using scanning tunneling microscopy (STM), but they found that accurate characterization of some ferrocene-based materials was challenging due to rotational motions of the molecules. To address this issue, they began using ferrocenes functionalized with carboxylic acid groups, with the idea that hydrogen bonding between carboxylic acids would cause molecules to pair up and thus immobilize them for study.  Pairs of carboxylic acids—or dimers—are known to result from hydrogen bonding in almost all cases.  For ferrocene carboxylic acid in a thin layer on a surface, however, the team observed a completely different dominant structure, in which groups of five molecules formed hydrogen-bonded rings; they observed pentamers instead of dimers.

Molecular modeling was used to determine the driving force for pentamer formation. These simulations revealed that, while the molecules were interacting with the expected hydrogen bonding motif through the carboxylic acid group, an additional C-H-O interaction between one ferrocene ring and a neighboring carboxylic acid group led to the stabilization and observation of these five-membered structures.

This five-fold symmetry is rarely observed on surfaces. Unlike squares or hexagons, pentagons cannot cover a surface without gaps.  For ferrocene carboxylic acid, the observed gaps appear in a variety of shapes, including rhombuses and stars.  The overall pattern closely resembles a Penrose tiling, a mathematical construct for covering a plane originally demonstrated in the 1970s.  Other properties of Penrose tilings are also observed for the new material, including local five- and ten-fold symmetry and long-range orientational order. The distances between pentamers is not a singular value, as in a crystalline material, but instead are found to be multiple lengths related to each other by the golden ratio.

The next steps for the research team will be investigating other similar molecules to determine if they also exhibit this unusual behavior. They will also probe the thermal, frictional, and magnetic properties of the materials in order to work towards potential applications.