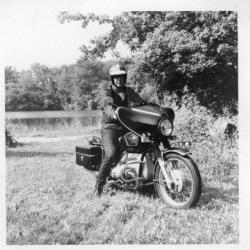 Rev. Joseph L. Walter, C.S.C., passed away on Wednesday, April 18, at Loyola University, Stritch School of Medicine, in Chicago. He was 82 years old.

He spent one year, 1955-1956, with Rev. T. J. Lane, C.S.C., at Notre Dame on a post-doctoral appointment. In 1956, he attended the Holy Cross Novitiate in Jordan, Minn. He studied theology from 1957-1961 at Holy Cross College, Washington, D.C. and was ordained to the priesthood in the Congregation of Holy Cross on February 4, 1961 at the National Shrine of the Immaculate Conception, Washington, D.C.

Fr. Walter taught at the University of Notre Dame each summer session during the years from 1958 to 1961. He was appointed Assistant Professor in September 1961 and Associate Professor in September 1966. He taught various courses in Chemistry, Analytical Chemistry, Inorganic Chemistry, Inorganic Preparations, graduate Inorganic Chemistry and Coordination Chemistry. He was also fortunate in obtaining funding from two grants from the National Institutes of Health (NIH) which enabled him to run a graduate program that produced 30 research papers in inorganic chemistry and medical education as well as being able to deliver many papers at national meetings.

In 1971, Fr. Walter was appointed Chairman of the Department of Preprofessional Studies while allowing continuing research and teaching. During that time he was also appointed to the Executive Board of the Central Association of Advisors to the Health Professions (CAAHP) and became one of the early leaders in the professional development of prehealth advisors through his involvement in the National Association of Advisors for the Health Professions (NAAHP) and the CAAHP. The CAAHP Award for Outstanding Advising is named the “Father Joseph L. Walter Award” in his honor, and goes each year to the person who typifies the qualities that he brought to the health advising profession. Fr. Walter was also initiated as a member of Alpha Epsilon Delta (AED), the honorary premedical society, and became the national Vice President of 168 Chapters with 130,000 members in 1980, and national President from 1984 until July 1992. He also served as the editor of the AED National Newsletter from 1988 to 2000. He was elected in March 1994 to be the life-time honorary national President of Alpha Epsilon Delta, as well as being a life time member of sigma XI and Phi Lambda Epsilon, honor societies of the sciences. In 1983, Fr. Walter received the President’s Award from Rev. Theodore M. Hesburgh, C.S.C., and the University of Notre Dame. Fr. Walter became Professor Emeritus in May 2005.

His extraordinary commitment to education, his sense of humor and keen wit will be greatly missed.

Viewing for Fr. Walter will be held in the Chapel of Moreau Seminary, University of Notre Dame, on Sunday, April 22, 2012 from 3:30 - 9:00 p.m. with a Wake Service at 7:30 p.m. The funeral Mass will be celebrated at the Basilica of the Sacred Heart Basilica, Notre Dame, Ind., Monday, April 23, at 3:30 p.m. Kaniewski Funeral Home is handling arrangements.

May he rest in peace.