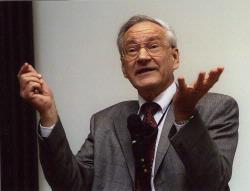 Dr. Ernst is professor at the Swiss Federal Institute of Technology (ETH), Zürich, Switzerland. He received the Nobel Prize in Chemistry (1991) for his fundamental contributions to nuclear magnetic resonance (NMR) spectroscopy. These contributions underlie all applications of NMR from chemistry and physics to biology and medicine.

The following is an abstract for Dr. Ernst's talk.

"Nuclear Magnetic Resonance (NMR) spectroscopy has undergone quite remarkable a development. Starting from a curious physics experiment, apparently of little practical use, it became one of the most powerful analytical tools of science with applications that proved to be indispensable in chemistry, biology, and medicine. Indeed, its growing importance is well recognized by the Nobel Committees in Stockholm. Already eight Nobel Prizes were awarded for achievements in NMR. Additional Nobel Prizes have been given to scientists for work that proved to be seminal for NMR. Several Nobel Laureates who significantly contributed to NMR received their prizes for innovations in other fields. This lecture traces the various contributions of those who have been honoured by a Nobel Prize, mentioning also some of those who would have equally deserved this honor."