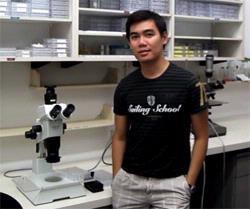 Major Gooyit, a graduate student in the laboratories of Shahriar Mobashery and Mayland Chang, has won a Baxter Young Investigator Award from Baxter International Inc., a global healthcare company involved in medical devices, pharmaceuticals and biotechnology. The award focuses on researchers whose work can be applied to critical care therapies. Gooyit, who earned a degree in chemistry at the University of the Philippines and came to Notre Dame in 2007, works on the elucidation of molecular mechanisms of gelatinase-dependent diseases such as neurological diseases and diabetic wounds.

Gooyit is a Fellow in the NIH-funded Chemistry-Biochemistry-Biology Interface (CBBI) Program. He is working on the development of gelatinase inhibitors and evaluation of their in vivo efficacy in mouse models of stroke, traumatic brain injury, and diabetic wound healing. He also has developed a bioanalytical method for measuring the levels of the drug in plasma and brain and established that the thiirane class of gelatinase inhibitors readily crosses the blood-brain barrier. Gooyit will present his research when he receives the award on September 13 at Baxter International in Deerfield, Ill.