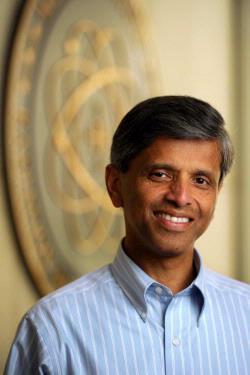 Jin Ho Bang of Hanyang University, a former postdoctoral associate of Prashant Kamat, has co-authored a paper with Kamat, the Rev. John A. Zahm Professor of Science, detailing an advancing understanding of semiconductor nanocrystals and another step towards the development of a more efficient generation of solar cells.

The new research relates to quantum dot solar cells. Quantum dots are semiconductors whose electronic characteristics are closely tied to the size and shape in which their crystals are synthesized; since the synthesis can be precisely controlled, the quantum dots' bandgaps are tunable across a wide range of energy levels, giving quantum dot solar cells the potential to extract more power from the solar spectrum than cells made with standard bulk semiconductors, whose bandgaps are limited by the choice of material composition.

Bang and Kamat's study has led to the development of an organic/inorganic hybrid nanocomposite film of dramatically improved efficiency, using a process in which CdSe quantum dots and fullerene (C60) are deposited onto optically transparent electrodes. The study particularly examines the electron-transfer mechanism between the two components, providing a much-needed clarification of C60's role in quantum-dot-based light harvesting systems.

The paper will be highlighted in the December issue of the journal ACS Nano.