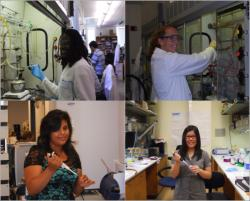 Four local high school students are the recipients of national and local section American Chemical Society (ACS) awards to the Project SEED program and represent the Department of Chemistry and Biochemistry’s very first participants in Project SEED. The Summer I phase of Project SEED in which these students are enrolled provides a $2,800 fellowship to deserving students to engage in summer research at an academic, government, or industrial laboratory. An important feature of Project SEED is its emphasis on career development and its goal of motivating students to pursue higher education in the sciences. The local program was coordinated by Dr. Mary Prorok of Notre Dame and Prof. Phil Bays of Saint Mary’s, who has also served as a member of the ACS committee on Project SEED.

The students that were selected for this summer’s program are Asia Marie Adams Thomas (Washington), Annamarie Dibley (Elkhart Memorial), Wing Yan Kwong (Penn) and Judith Rodriguez (Elkhart Memorial). All are rising seniors except for Asia who will be a junior this fall. Asia is working under the guidance of Prof. Paul Helquist on the synthesis and characterization of therapeutics for Niemann-Pick disease. Asia is a track and field athlete at Washington, is a member of Drum Corps and Step Team, and also sings in her congregation’s gospel choir. She hopes to pursue a career as a rheumatologist or in some facet of sports medicine. Annamarie is interning in Prof. Ken Henderson’s lab where she is pursuing the synthesis of novel organometallic bases. In her spare time, she is an active participant in her church, sings in the school choir, and takes part in school plays and musicals. She is also on the girls’ soccer and tennis teams at Elkhart Memorial and is the captain of the Speech and Debate team. Annamarie is planning to major in nursing at Saint Mary’s, followed by a training program in midwifery. Wing is working under Prof. Rob Stahelin’s direction, where she is using bacterial systems for the expression of human membrane proteins. Wing is an avid reader and is looking towards studying either accounting or chemical engineering—or both! Judith is working on a variety of projects in the Mass Spectrometry and Proteomics Facility with Drs. Boggess, Champion, and Joyce. She is active in several clubs at school, including the Superintendent’s Student Advisory Council and is a member of the National Honor Society. Her future plans entail a career in the medical field. By all accounts, these young women have stepped up to the challenges and rewards of scientific research and are enjoying productive summers in their respective labs.

Department hopes to have these seasoned researchers back next year for the Project SEED Summer II phase of the program and looks forward to hosting a new group of Summer I students as well.